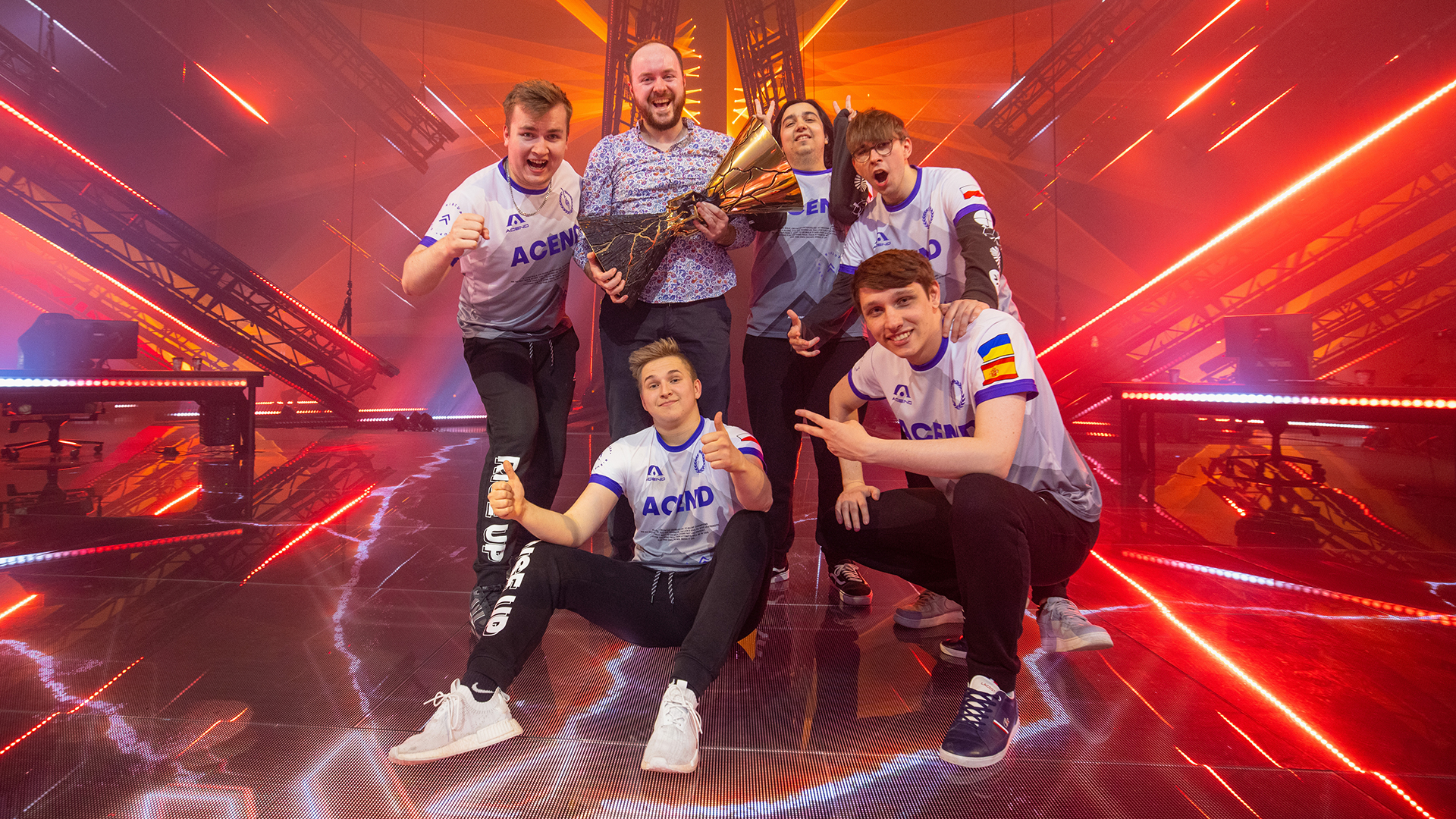 A brand-new organization emerged in the remnants of Raise Your Edge Gaming in early 2021, carrying over the entire roster and only making one change between winning VALORANT Masters in March and competing in VALORANT Champions in December. Trading koldamenta to G2 Esports for Aleksander ‘zeek’ Zygmunt was the final piece in the puzzle for Acend’s lineup, proving more than worthy of the spot a she eventually found himself crowned the MVP of VALORANT Champions 2021.

Acend would win several titles with this roster, including the LVP – Rising Series #2, VCT2021: Europe Stage 3 Challengers 1, and the LVP – Rising Series – Finale. However, that wasn't without falling just short in several other big-name events. Nevertheless, they fought hard and found themselves qualifying for the biggest VALORANT event to date, VALORANT Champions 2021.

Acend would begin the event in Group A, with X10 CRIT, Team Envy, and Vivo Keyd. Starting their VALORANT Champions journey debuting against Vivo Keyd of Brazil, Acend drop the first map 9-13. Despite the shaky start, Acend settled in and whipped the floor with Vivo Keyd 13-3! Heading to the final map, Acend struggled on defense, leading to them switching sides while down 4-8. Widening the lead, Acend loaded into Round 15 down 4-10 and, despite best efforts, fell to the hands of Vivo Keyd. That was until an investigation took place, causing Riot to eventually overturn the match result because of the use of a known bug, giving them an unfair advantage.

That ruling would send Acend to the Group A Winner’s Match against Team Envy. Desperate to prove their deserving place in the match, Acend was ready to play. Starting off the map with a decisive 4-0 lead, Acend eventually took the first map 13-8. Moving onto the second map, Acend started strong out the gates again but quickly lost tempo leading to a nail-biter win 13-11, advancing themselves to playoffs atop Group A and proving the haters wrong.

Heading into the playoffs with the second-best (+/-) round score in the tournament, it was fitting that their first opponents would be the only ones to top them in the stat, Team Secret. Acend would go on to win the first map that Team Secret chose. Boosting their confidence, Acend started strong on their map of choice with an early-round lead that never broke. Acend took the second map 13-6, winning the match 2-0 and heading to the semi-finals, where they would play the winner of Team Liquid and Cloud9.

With their eventual semi-final opponent being Team Liquid, it's worth mentioning that the last time these two teams met was just the month prior in the final of the RedBull Home Ground #2 event, where they fell to the hands of Team Liquid, 3-1. Ready to redeem themselves when it meant the most, Acend rose to the occasion again, claiming the first map 13-6! Looking unstoppable, Acend continued to silence the nay-sayers and demolished Team Liquid in the second map 13-5, advancing to the grand finals to face none other than fellow EMEA competitors, Gambit Esports.

Despite Acend’s rise throughout the tournament, only dropping a single map to this point, getting through Gambit was going to be like doing it all again. Gambit Esports was perhaps the ultimate test for Acend to prove themselves once more and ascend their story to become legends in VALORANT. The two teams have battled multiple times throughout the year, and despite Acend having a better record overall against Gambit Esports, Gambit was still considered the big kid on the block, winning when it counts. The arch of this Acend and Gambit rivalry begins with VALORANT Champions Tour 2021 in the EMEA Stage 3 Challengers Playoffs in August. The first meeting in round three of the upper bracket, Acend took down Gambit 2-1 to advance to the upper bracket final. There, they would lose to SuperMassive Blaze and demote to the lower bracket final to face none other than Gambit Esports, who had just come off a decisive win against G2 Esports. There, Gambit Esports would have the better of Acend, taking the best of five, three maps to one and eventually winning the event.

Hungry to avenge themselves, Acend would look to take down Gambit at the next available opportunity, Stage 3 Masters – Berlin the next month. Unable to find their footing, Acend lost in the quarterfinals to 100 Thieves (the team that beat Gambit in their group), losing the opportunity to get back at Gambit Esports,where they would have met in the finals. Instead, Gambit Esports continued their dominance over Acend’s group winner – Vision Strikers. They quickly dismantled both G2 Esports and Team Envy, despite them toppling their regional counterparts in Sentinels and 100 Thieves. Taking the trophy in Masters –Berlin, many fans of VCT foresaw this being the result when the teams would return to Berlin once again for VALORANT Champions 2021.

But, before meeting Gambit Esports in the year's final event, Acend had one last chance to regain the momentum in the rivalry at the Red Bull Home Ground #2 event in November. Meeting in the quarterfinals, Acend had their chance and did they ever take advantage of it. After edging out Gambit in overtime on the first map 15-13, Acend went on to display their dominance in the last chance they had before VALORANT Champions, taking the second map (and the match) with a 13-0 perfect game.

With the year now behind them, and only one match left in front of them, the players of Acend knew it was showtime. Despite only overcoming Gambit in less important games, Acend was ready to place the finishing pieces of their legacy with a symbolic win over Gambit Esports. The stage was set, and Acend saw themselves with nothing else in front of them except one last enemy.

Acend started guns blazing on the first map and led the game to a 9-1  start on defense. Despite such an aggressive early advantage, Gambit wasn't going to back down as they did in the Red Bull Home Ground #2 event. It was Round 17, and Acend was just two away from taking the first map, but Gambit decided it was time to wake up. Gambit Esports clawed their way back in one of the most incredible runs to date in professional VALORANT, winning the next eight rounds straight and claiming the first map 13-11.

It’s impossible to imagine the internal struggles the players of Acend were enduring having been so close to taking the first map and having it ripped from their hands. Still, Acend headed out to Ascent, knowing it was a best of five, and with a win here, it would be like a clean slate best of three from then on. Even though they had lost eight rounds straight only a few moments prior, Acend returned to form and took charge of the second map, 13-7.

Heading into the third map with a game apiece, Acend wanted to claim the lead for their own and take Gambit's selected map from them to have a huge advantage going into their selected map in Icebox. Acend fell to Gambit in the third map despite their hopes, and they fell hard, losing 3-13.

With their backs now against the wall, it was their last chance to overcome their rivaling brothers. Clawing their way through the rounds, tossing the lead back and forth between them, the teams headed to overtime. Acend clutched the overtime to win14-12.

It all came down to this. Heading out onto the stage for the last time, it was all or nothing. The last chance to claim their throne as the undisputed, best in the world. Acend started the final game strong and didn't take their foot off the gas, taking down Gambit Esports when it mattered, 13-8.

Champions of the world.